Developer Urban & Civic has unveiled reworked plans for an £80m commercial and housing scheme in the heart of Manchester city centre.

A previous scheme for the site on the corner of Princess Street and Whitworth Street was abandoned in 2008 after foundations for three buildings and a four level basement car park had been built.

Urban & Civic bought the site with an extant planning permission for offices, apartments and a hotel at the end of last year.

The revised scheme will consist of two blocks delivering 240 flats, a four-star hotel, ground floor retail and restaurants and a landscaped public square. 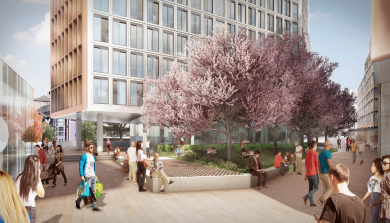 The plans were revealed at a public exhibition this week and it is expected to go in for planning later this autumn.

“Our vision is to create a vibrant development that complements and enhances the historic context and sensitively reconnects the site to its surroundings.

“We believe the introduction of retail and restaurant units on the ground floor level showcasing some of the City’s finest and most eclectic artisans along with a landscaped public square will help reinvigorate and re-energise this part of the City.”