Industry crystal ball gazers have revised up their growth forecasts once again and predict construction will now expand by about 10% over the next two years.

This year’s new growth forecast from the Construction Products Association has been marked up from the earlier estimate of 3.4% at the start of 2014 to 4.7%, despite a slowing of growth in the first quarter, according to the last official output figures.

The rise will see construction contribute nearly £11bn to the UK economy.

Office building is expected to kick in alongside private house building as a big workload driver, while warehouse schemes will jump 20% this year. 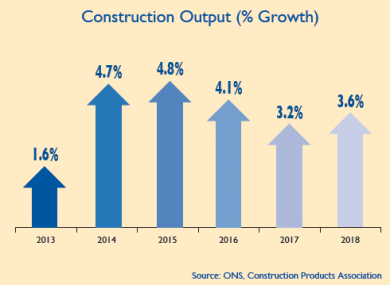 Dr Noble Francis, Economics Director of the Association, said: “Overall levels of activity will likely match their 2007 peak in 2017.

“In the short-term, the activity will primarily be led by private housing, infrastructure and commercial.

“Notably, in the long-term, we expect this activity will be boosted by work on schools and hospitals.”

The private housing sector continues to benefit from the improving economic backdrop and government policy measures, with housing starts expected to grow 18.0% in 2014 and 10.0% in 2015.

After that affordability and higher mortgage repayment costs are expected to subdue private housing growth to 5% per year from 2016.

Commercial work is expected to also pick up strongly on the back of office building activity spreading from London to other key regional markets such as Manchester, Edinburgh and Birmingham.

The CPA forecasts that commercial offices output will rise 10% this year and 8% in 2015.

The Association anticipates infrastructure output will rise across roads, rail, energy, and water and sewerage, delivering a net expansion of 9.2% this year and 7% next, primarily due to major projects such as Crossrail and nuclear decommissioning.”

Dr Francis added: “Forecasts continue to be revised up as the UK economy rebalances away from consumer spending and services towards manufacturing.