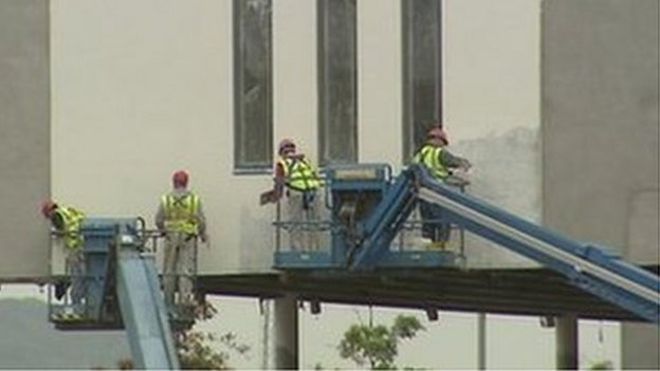 The construction industry in Scotland is more optimistic than at any time in more than 10 years, according to the latest Chambers of Commerce survey.

The quarterly report, covering April to June, showed orders for commercial clients were stronger, though less so for public sector and house-building.

Asked about business optimism, 43% of construction businesses said they were positive, and only 15% negative.

It follows sustained and deep declines in employment between 2008 and 2012.

There have now been six consecutive quarters of jobs growth in construction, according to research compiled by Fraser of Allander Institute at Strathclyde University.

Building companies reported they are operating at around 85% of capacity.

Concerns about skill shortages were slightly down, to 29% of those responding.

Some 70% of firms either maintained or increased export sales revenue during spring, and there is a strong expectation of further growth in the current quarter.

More than 40% of manufacturing firms were upbeat about prospects, and 14% were pessimistic about the outlook. On exports, the balance was 41% to 5%.

Around half of companies were planning investment, but there were concerns raised about a lack of the skills they require.

The survey showed those in the supply chain for the oil and gas industry were downbeat about the prospects, following the sustained lower price in Brent crude oil.

Researchers for the Scottish Chambers of Commerce were told that the outlook had weakened in the large financial and business services sector. The findings point to profitability and cash flow being down.

Retail and wholesale saw a positive balance among firms, after downbeat results throughout 2014.

In tourism, businesses reported rising revenue for 59% and falling for 16%. Optimism outweighed pessimism by 42% to 13%.

Liz Cameron, chief executive of the Scottish Chambers of Commerce, said: "Our indicator for the second quarter of 2015 points to a Scottish economy where most business trends are positive and which is establishing a pattern of reliable growth, even if it is slower than we would like.

"The main exception to this overall pattern is within the oil and gas service sector, where the performance and outlook of businesses was noticeably below the levels reported in other service sector firms. This was true of businesses not just in the north east of Scotland but across the country, where oil and gas was the main focus of their business.

On construction, she said: "Our governments must look to the future to identify where the large scale public sector construction work will be coming from once projects such as the Queensferry Crossing and Edinburgh-Glasgow rail electrification are complete.

"The manufacturing sector looks much more positive in the second quarter of the year, with strong trends in both sales and orders."