Howard Davies’s Airports Commission has recommended building a new runway at Heathrow, rather than Gatwick.

The influential report praises the merit of both plans leaving the door open for Gatwick if Heathrow fails to deliver improvements on noise and air pollution.

Now the Government must give its final verdict on which airport should proceed with major investment plans.

Heathrow Airport plans to spend £18bn on building a 3.5km runway, almost double what a new runway at Gatwick would have cost.

Davies said: “At the end of this extensive work programme our conclusions are clear and unanimous: the best answer is to expand Heathrow’s capacity through a new northwest runway.

“Heathrow is best-placed to provide the type of capacity which is most urgently required: long haul destinations to new markets. It provides the greatest benefits for business passengers, freight operators and the broader economy.”

But the report stipulates that Heathrow is favoured only if it can meet stringent conditions on noise and air pollution.

These conditions should include a ban on night flights, legally binding caps on noise and air quality – and legislation to rule out ever building a fourth runway. 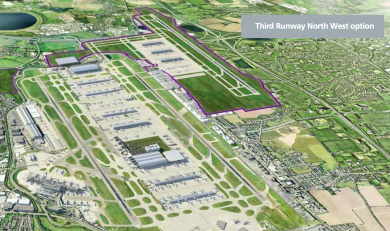 The 3.5km runway would be just south of the M25/M4 junction and part of the M25 would need to be reconfigured.

Passengers would travel through a new Terminal 6 and an extended Terminal 2 with satellite piers serving the new runway. The terminals would be connected by a new underground passenger transit and baggage system.

Construction of the new runway could be completed in six years with an estimated operational date of 2026.

Land will be set aside for offices and hotels to provide more than enough space to replace commercial premises lost to the third runway.

After years of delaying the decision on where to build extra airport capacity the Government is being urged to act on the report.

Davies added: “The government will need to review our analysis carefully. The Commission urges it not to prolong this process, however, and to move as quickly as it can to a decision.

“Further delay will be increasingly costly and will be seen, nationally and internationally, as a sign that the UK is unwilling or unable to take the steps needed to maintain its position as a well-connected, open trading economy in the twenty-first century.

John Cridland, CBI Director-General, said: “Now that Sir Howard’s Commission has made its recommendation, the Government must commit to the decision now, and get diggers in the ground at Heathrow swiftly by 2020.

“Growing airport capacity in the South East is absolutely critical to the whole of the UK’s economic future – it simply isn’t an optional “nice to do”.

“Each day the Government delays taking the decision, the UK loses out as our competitors reap the rewards and strengthen their trade links.

“Creating new routes to emerging markets will open doors to trade, boosting growth, creating jobs and driving investment right across the country. Our research shows that eight new daily routes alone could boost exports by up to £1 billion a year.

“The UK’s economic future cannot be kept waiting on the tarmac any longer. By taking the decision now, the Government can send the message, loud and clear, that Britain is open for business.”

Transport secretary Patrick McLoughlin said: “I will make a statement to Parliament later today in which I will set out the process for that decision to be made.”