The 192-room hotel, which will be operated by The Hoxton, is the focal point of 110,000 sq ft mixed-use development of Wedge House at 40 Blackfriars Road, London SE1.

Designed by architects Lifschutz Davidson Sandilands the scheme also included 42,000 sq ft of office and is due to complete in 2018. 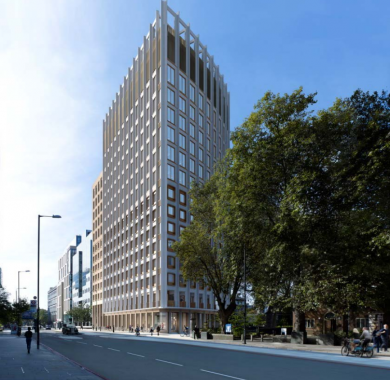 Nigel George, Director of Derwent London, said: “We are delighted that Southwark Council has approved this exciting new mixed-use development.”

Sharan Pasricha, Founder and CEO of Ennismore/The Hoxton said: “Southwark is an incredibly exciting part of London. South of the river is where we chose as home for our third London property because we’re big fans of the neighbourhood, especially the theatre and food scene and we’re looking forward to growing up alongside it. We chose to work with Derwent London as they have re-imagined some amazing buildings in London and we’re continually impressed by their work.”

The project is one of several high-rise schemes in planning or under construction between Blackfriars Bridge and St George’s Circus.

The area has been designated as an area for tall buildings in Southwark Council’s SPD for the locality.