Enabling works for a futuristic hotel at the heart of the planned £850m Edinburgh St James’ scheme will start in the New Year after getting the planning thumbs up.

Developer TH Real Estate was granted planning permission for the controversial hotel by the City of Edinburgh Council last week.

The developer has now confirmed that it will start demolition of the existing St James Centre, subject to a successful compulsory purchase order in early 2016.

The replacement 210-bed Central Hotel, which will sit at the heart of its mixed-use scheme, has been designed by  Jestico + Whiles as a landmark for the city with the appearance of a bundle of ‘coiled ribbons’ 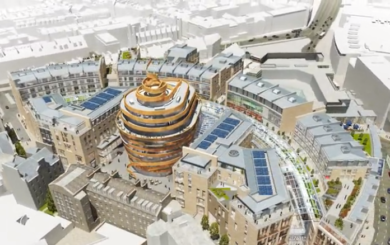 It marks the last major planning decision for what will be one of largest regeneration projects currently underway in the UK.

The redevelopment will see the 1970s shopping centre currently on site replaced with 850,000 sq ft of retail space, up to 250 new homes, 30 restaurants and a multi-screen cinema, as well as the world class hotel.

Now the developers are working towards a January vacant possession of the St James Centre. Tenders were invited for the building project in June attracting interest from several major contractors, including Laing O’Rourke.

Martin Perry, director of development, TH Real Estate, said: ”The building will be the centrepiece of Edinburgh St James and will reinforce the city’s position as an international destination.

The hotel’s iconic design has already generated interest from global hotel operators, and the decision to approve our proposals takes us one step closer to starting work on-site next year and to delivering the development.