Developer Knight Dragon has got the thumbs up for a rejigged masterplan for London’s Greenwich Peninsula raising the number of homes from 10,000 to nearly 16,000.

The £8.4bn plan has upped the height of several building to around 40 storeys and will include two schools, shops, bars and restaurants.

Knight Dragon already has nearly 3,000 homes under construction, with 700 homes completing this autumn and the first residents moving in this month.

The new vision for the residential-led development has been designed by London-based architects Allies & Morrison and expands the originally consented 2004 scheme which had stalled for many years.

“Something like this only happens once in a generation in London. We have big plans for the Peninsula and the team, the determination and the finance to deliver them.”

The 1.6 miles of the River Thames surrounding the Peninsula is set to experience a new lease of life.

A 5km running track will sweep along the riverfront and weave through the neighbourhoods on the Peninsula.

The Peninsula in numbers 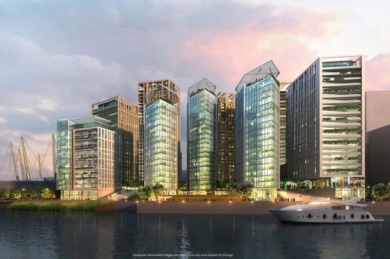