Updated designs were released as Network Rail entered the second phase of public consultation to start work in 2015.

Big changes include the design of the façade and shape of the roof.

As well as overhauling Queen Street’s rail infrastructure and operational capabilities, the redevelopment will transform passenger facilities and improve how the station interacts with the surrounding city. 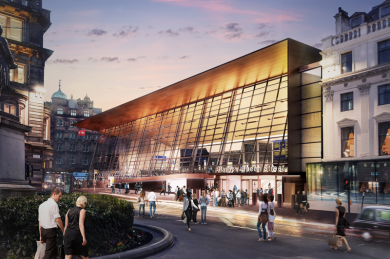 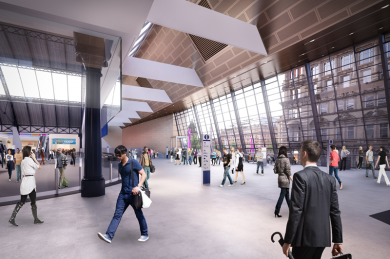 The Queen Street redevelopment is part of the Edinburgh Glasgow Improvement Programme (EGIP), which will deliver a rolling programme of electrification across central Scotland over the next five years and beyond.

Transport Minister Keith Brown said: “The redevelopment of Queen Street station will be another huge benefit of EGIP, which has already delivered the stunning new-look £25m Haymarket Station in Edinburgh, as well as improving journeys and facilities for passengers at all points in between.”

The consultation is being undertaken as part of Network Rail’s application for a Transport and Works Scotland Order to acquire the powers and permissions needed to deliver the new station.

The TAWS application will be submitted to Scottish Ministers in June 2015.