Plans for the £390m expansion of the Buchanan Galleries in Glasgow have been approved allowing construction to start this summer.

Lend Lease is widely tipped for the major construction contract although joint owners Land Securities and Henderson Global Investors have yet to confirm their favoured contractor.

The expansion will include new retail space, a striking new atrium entrance onto Buchanan Street, and new bar and restaurant facilities.

Works will focus on an extension to the north and east of the current Buchanan Galleries, developing on the centre’s current car park and extending the shopping mall over the railway lines of Queen Street station.

In total, the scheme will deliver £310m of private sector investment along with £80m of public realm and infrastructure improvement funded using the Tax Increment Finance model. 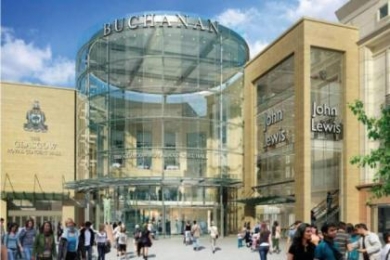 Alongside our TIF scheme, the expansion of Buchanan Galleries will improve the city centre’s public realm and infrastructure, and generate 1500 jobs.”