City watchdog the FCA has committed to 425,000 sq ft within a new 515,000 sq ft new building clearing the path for construction to start.

The latest deal comes soon after Transport for London signed a pre-let for the entirety of a new 265,000 sq ft adjacent building at the new London business district.

With detailed planning consent already secured for both buildings, construction will start this summer, ready for occupation in 2017 and 2018 respectively. 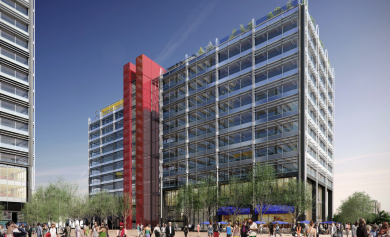 David Joy, chief executive at LCR, said: “We are pleased to have reached this pivotal milestone for one of the largest and most significant mixed-use developments in the UK. The International Quarter will be a major new employment hub in East London, creating more than 25,000 jobs in total, and we have been working closely with Lend Lease to make this happen.”

Lend Lease and LCR are in discussions with several other major tenants about moving to The International Quarter – which, at a total of 4million square feet, is one of the largest new commercial developments in Europe.

Once completed, more than 25,000 people will work at the development each day.