The University of Oxford has picked Mace to build a pioneering data centre to lead the battle against disease.

The new building designed by architect Make will store vast amounts of information to give researchers new insights into illnesses and treatments worldwide.

Known as the Big Data Institute project, it has been funded with a £20m gift from the Li Ka Shing Foundation and gained planning last month.

According to construction information specialist Glenigan work could start on the project before the end of the year.

The building complex will be located at Headington between two of Make’s recently completed laboratory buildings – the Kennedy Institute of Rheumatology and the NDM Research Building – at Old Road Campus.

It forms part of a £1.8bn decade-long capital masterplan, which the university began implementing this year. 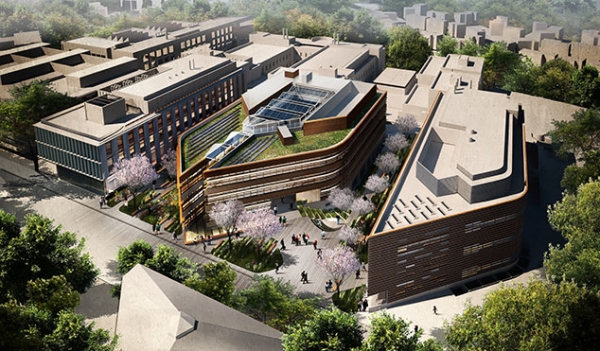 The chevron-shaped building, which will house 600 staff, will have a green roof and feature a sunken garden area with a bridge.

As part of the sustainability strategy for the building, a labyrinth is located beneath the lower ground floor which draws in air through a light well and uses the thermal mass of the ground to cool it, before circulating it to the main roof top plant room.

This air is then distributed via floor plenums as part of an assisted natural ventilation strategy and extracted via the atrium using the stack effect.