Development Securities has awarded McLaren Construction a £25m contract to build the first phase of a mixed-use regeneration scheme in north west London.

The former Oriental City shopping centre in Collindale is being redeveloped with 223 town houses and apartments, a 80,000 sq ft Morrisons foodstore and additional retail facilities.

Work on the 399 Edgware Road development is set to begin in the Autumn with Morrisons and the oriental and far eastern foodcourt opening in 2015. 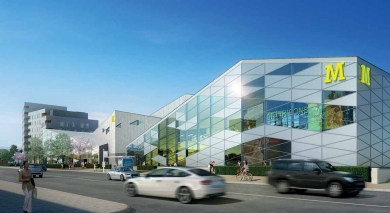 There will then be a phased delivery of the residential element of the scheme, with the first units completed by 2016.

The site was purchased in 2005 by Development Securities which secured planning consent for a mixed-use, retail and residential-led redevelopment of nearly 1m sq ft.

The downturn torpedoed the ambitious scheme in favour of the scaled down scheme, which has been designed by Sheppard Robson.