A sister skyscraper to Manchester’s landmark Beetham Tower will finally be built more than three years after plans were first approved.

Resurrection of the plan offers a potent symbol of surging economic confidence in Manchester as schemes take off around the city.

Following the completion of enabling works, main construction of the 125m tower is expected to start midway through next year, after Manchester planners gave the green light last week to amendments to the previously approved plans.

Once finished it will stand a little shorter than the 47-floor Beetham Tower, which rises to 169m. 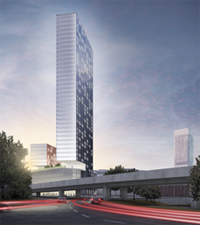